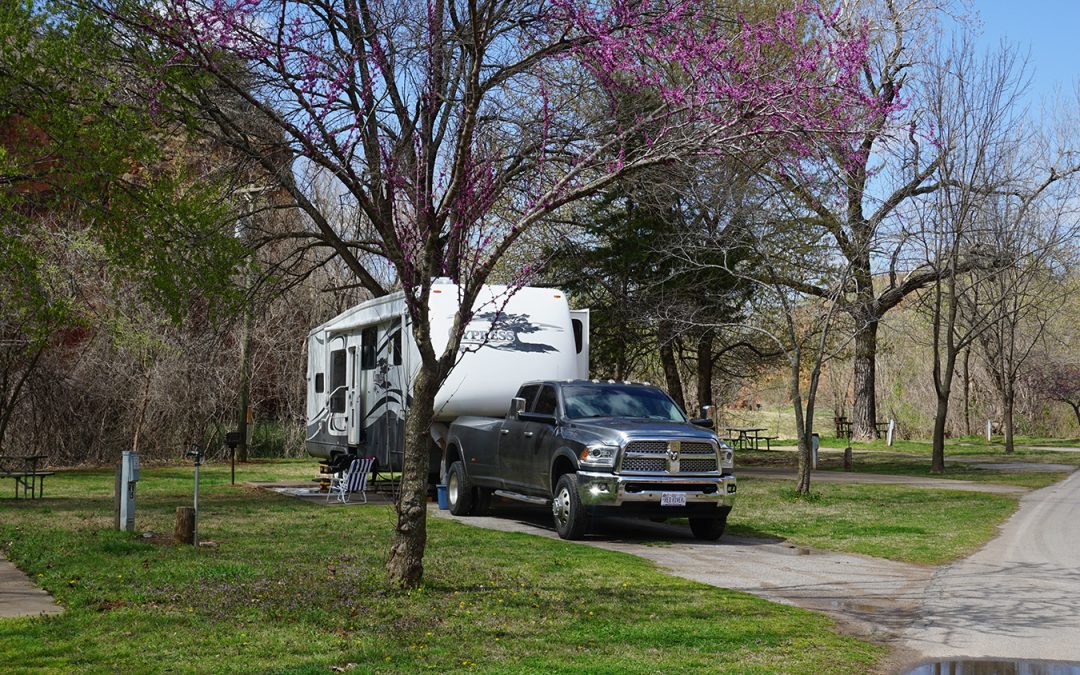 Getting used to being on the road again.  We have had two ‘targets’ which drive our schedule. The first was a music gig at Pecan Creek Winery in Muskogee OK which meant we had to schedule our days to be there on time. Then the next was to be at the Asheville, NC VA hospital for my annual checkup. We will be there on Wednesday for that easily.

It has been an enjoyable two weeks since pulling out of Red River, albeit not without some challenges to work through. 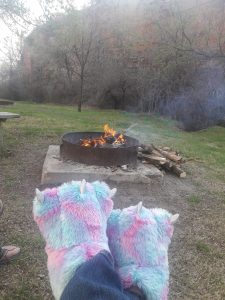 The weather turned cold, drizzly and dreary while we tried to troubleshoot some issues. New trailer brakes are shorting somewhere and 4 hours in a shop proved it might be hard to find. I did discover a trapped wire from my install – but that didn’t solve it! Finally after just cutting out all the connectors in the wiring to the brakes, checking for proper resistance, and reinstalling the connectors – the issue went away! Another one of those “take it apart and put it back together and hope it works out” success stories!

The crock pot jumped out of the cabinet over the fridge onto the floor, and wedged the cabinet face in the slide out which then ripped it in two as we were putting out the slide. All fixed but out of wood glue now!

Just normal stuff working out the bugs as we start moving again after 4 months sitting out the winter in Red River.

The main slideout is not coming in. I have to get under there every morning with a big pipe wrench and help it get started. Just glad we can get it in until we get somewhere I have the time and weather to figure out what is wrong. And we have two dump valves that need replacing. Definitely need those fixed before we have a really big mess on our hands!

Our normal day is to be on the road by 9 or so, and drive somewhere around 120-150 miles so we can be in just around lunchtime. That gives us time to explore in the afternoon and is an easy drive. We stay in wineries, state and national parks and anywhere that looks interesting! If we have to, we will stay in an RV park but normally they are crowded, expensive and noisy being close to the road.

It’s truly amazing what you discover in some of these places! 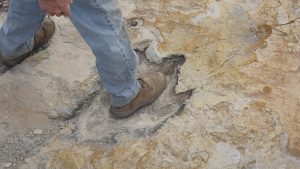 First night was in Clayton Lake State Park where we found thousands of dinosaur tracks. How cool is that! Apparently there used to be an inland sea cutting the US in half north to south and Clayton was a tropical swamp on the western edge where these herds of dinosaurs roamed in the mud. The mud got covered and the tracks were frozen in time until an overflow from a man made lake revealed them. Amazing! 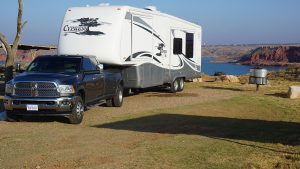 North of Amarillo TX we stayed at Meredith National Park on a Meredith Lake with only one other RV. It was a beautiful morning with a short but welcome relief from the cold, wet weather.

On the following day we found ourselves back in Bixby, OK visiting the Swegers where we had backed the truck into the tree last July.  This time, unbeknownst to us, it had been raining for the last week and as I pulled into the drive the trailer wheels dropped of into the

mud and sank like a stone. It took Ronny, his three boys and a lot of crawling around in the mud with jacks and stuff 4 hours to get out of that mess! We ended up on Ronny’s drive with a high pressure sprayer removing mud from everything late in the day. Great to see our friends from The Foundation for Exceptional Warriors. They have a wonderful nonprofit serving veterans.

Had fun playing some music Pecan Creek Winery in Muskogee, OK, enjoyed the wine and the great people! if you get there ask Bob to tell you how he went from being a founding member of the Ozark Mountain Daredevils band to winery owner and Episcopalian priest! 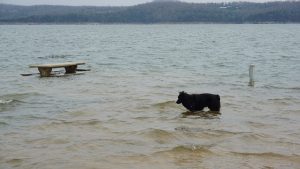 Into Arkansas and struggling to find open parks as most have late April as opening day.  The Corps of Engineers had Robinson’s Point open but most of the lake sites were under water!

Goose actually caught a fish today. He loves fishing! Notice the power pole in the water? 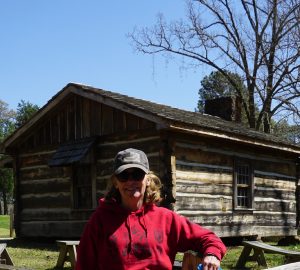 Crowley’s Ridge State Park had two other vehicles in the whole park while we were there. We sat out a tornado warning in the truck for a bit!  This place has a great story. It is a north-south area of rolling hills  from one to 12 miles wide that stretch approximately 200 miles  in Missouri and Arkansas.  The ridge, rising 450–550 feet in elevation out of the surrounding flatlands was formed by debris and river rock from the Mississippi River on one side and the Ohio River on the other. We are talking massive rivers! Cool stuff.

This morning we sit in front of Tennessee Valley Winery in Knoxville, TN heading over to Marion NC today for a week. Stop by here and ask John to tell you about his base playing in a South African band and try some of his awesome dry Riesling wine! We love hearing (and telling) stories!

Until next time. Safe travels!