Gettysburg to Sunday River Maine and Our Winter Home!

Where is the snow? We are ready!

We really like this area a lot!  Bethel, Maine to our surprise was just named one of the top ten ski towns in all the USA! Who knew?

People are super friendly and welcoming and very laid back. The area is absolutely stunning with the Androscoggin River running through the valleys and mountains headed to the Maine Coast only 90 miles away.

The RV is all settled in with a new mudroom, insulated skirt, additional 100 pound propane tank, as well as extra little heaters and light bulbs in vital areas to help prevent freezing of pipes and tanks.  Good thing as the weather forecast is calling for 18 degrees in the next ten days!

We left you in early October heading for Gettysburg on our way to Sunday River Ski Area and our ‘winter quarters’. So let’s catch up! We ended up traveling 2800 miles from Sunday River back to Sunday river in about a month! Whew!

Gettysburg was awesome. Even Shelly who has seen enough forts, battlefields and historical sites to last her a lifetime was suitably impressed. You have to imagine a 3 day battle neither army wanted where the Union army brought 125,000 men and left 24,000 on the field dead and wounded and the Army of Northern Va brought 75,000 and also left 24,000 dead and wounded on the field.

And they left those men there in the rain on July 3, 1863 for a town of 2400 people to care for. You can feel it as you walk around. Staggering. 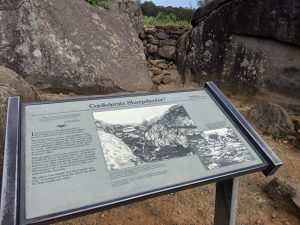 If you are a history person at all, you have probably seen the image of the Confederate sniper in the rocks that was staged three days after the battle. It was awesome to stand in that same spot!

We were able to camp in a park right across the street from Little Round Top. Daisy and I ran through much of the park each morning we were there by ourselves before it opened. I do not have the words to convey that experience.

From there, just up the road is Hershey PA so of course we had to visit. It was a bit anticlimactic after Gettysburg but worth a quick visit.

With trouble brewing in the slideouts we decided to punch on up to Bethel and get some work done and settle in before the advent of weather – which has been beautiful until now.

Apparently we brought with us the most beautiful fall colors seen in these parts in years! So now we are spoiled and will never be able to appreciate the Maine/New Hampshire/Vermont colors again!

See for yourself in the video.

At the end of the month we make the 2000 mile round trip to Marion NC for family Thanksgiving, then back for the start of ski season December 6. Hard to imagine really since it has not snowed yet!  We are hoping the boys come visit after Christmas if possible.

And Shelly is going to pick up another Golden Retriever puppy to start training for hearing alert for a friend who lost their dog lately.

The Goose video is done and will be out very soon. That continues to be a hard thing for us but crazy Daisy helps take the sting out somewhat. Your thoughts, emails, texts and prayers on the loss of Goose have been extremely touching and we are very appreciative.